Western Animation / Around the World in 80 Days 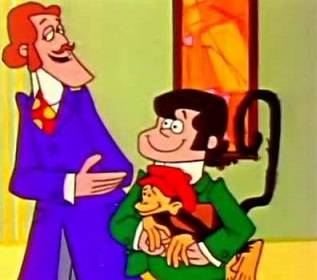 Good show, Passepartout!note  Phileas Fogg, Passepartout and Toto.
Lord Maze: So, Phileas Fogg, you want to marry me niece Belinda?
Phileas Fogg: Yes, Lord Maze.
Maze: Then prove yourself worthy. Travel around the world in eighty days!
Passepartout: Impossible!
Fogg: We shall do it!
Maze: I'm betting £20,000 you can't!
Fogg: It's a bet!
Advertisement:

Around the World in Eighty Days is an Australian 16 episode cartoon show produced in 1972 and a loose adaptation of Jules Verne's novel of the same name.

Phileas Fogg wants to marry the lovely Belinda Maze, niece to the unscrupulous Lord Maze. Maze makes a wager with Fogg that if Fogg can go around the world in eighty days, he may marry Belinda (with £20,000 thrown in as a sweetener). Fogg, along with his companion Passepartout and his pet monkey Toto, sets out to do so. Lord Maze, seeking to win the bet, sends a hired thug named Fix to prevent Fogg from reaching his goal.

Notable for being the first Australian cartoon shown on U.S. network TV, as NBC aired it as a Saturday Morning Cartoon in 1972-73.

Compare with its Spiritual Successor, Around the World with Willy Fog.