Manga / Dad, the Beard Gorilla and I 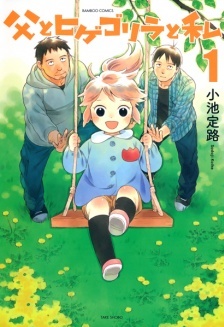 Kusahara Souichi's wife Miyuki has recently passed away and, being unable to juggle his work and raise his daughter Michiru on his own, he invites his younger brother Kouji to move in with the family to help out with the housework. Michiru is initially suspicious towards her uncle, whom she nicknames "Beard Gorilla", but as they spend more time together, they quickly form a close, sibling-like bond.

Dad, the Beard Gorilla and I (original Japanese title Chichi to Hige-Gorilla to Watashi) is a Seinen comedic 4-Koma manga by Koike Sadaji that revolves around the wacky hijinks that the family gets into as they make do with this strange new living arrangement, and deal with other issues such as grief and romance along the way. The story covers a period of 2-3 years, in which Michiru goes from kindergarten to her first year of elementary school.

The manga was published from Feb 4, 2011 to Nov 5, 2018 at the Manga Kurabu magazine under publisher Takeshobo.

This manga contains examples of :