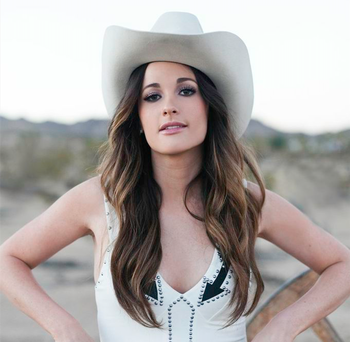 A Country Music singer from Golden, Texas, Kacey Lee Musgraves (born August 21, 1988) was first exposed to the world in 2007 when she placed seventh on season five of Nashville Star.
Advertisement:

Although she had been recording since 2002, she did not get her breakout until she appeared on Josh Abbott Band's 2011 single "Oh, Tonight". After that, she signed with Mercury and released her album Same Trailer Different Park, which has produced three country singles: "Merry Go 'Round", "Blowin' Smoke", and "Follow Your Arrow". She also co-wrote and sang backing vocals on Miranda Lambert's "Mama's Broken Heart", and has written songs for the Nashville soundtrack. In 2014, she won the Grammy Award for Best Country Song ("Merry Go 'Round") and Best Country Album for Same Trailer Different Park. Her second album, Pageant Material, was released in 2015. Her third album, Golden Hour, was released in 2018 to great critical success. It won her the 2019 Grammy for Best Album (along with three other awards). Making her the first country artist to win the top prize of the night since Taylor Swift won for Fearless in 2010. In 2019, she contributed a song entitled “All Is Found” to the Frozen II soundtrack.Her fourth album star-crossed was released in September of 2021.

She was married to fellow country artist Ruston Kelly from 2017 to 2020.