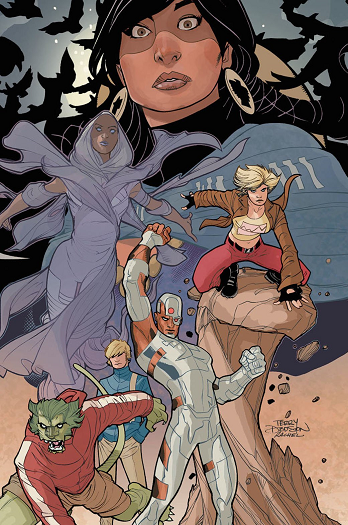 They were normal kids. Until they weren’t.
Advertisement:

Teen Titans: Earth One is a 2014 graphic novel from DC written by Jeff Lemire and illustrated by Terry Dodson. The fourth installment of DC's Earth One line after two volumes of Superman: Earth One and one volume of Batman: Earth One, it re-imagines The New Teen Titans of the 80’s for a new audience in the present day.

Raven, a young woman living with her grandfather on a Navajo reservation in New Mexico, has had strange visions her entire life. Visions of a mysterious alien girl and four kids she's never met before, but she senses they are all connected.

In the town of Monument, Oregon, Tara Markov, Victor Stone, Joseph Wilson, and Garfield Logan start to learn they're anything but normal when they develop strange and terrifying abilities. The four kids realize they are connected not just because of their powers, but by the visions they've started to have of a mysterious young woman. As the group tries to learn more about who and what they really are, they learn two frightening truths. Not only were their parents secretly expecting these changes to occur, they aren't even their real parents!

Teen Titans: Earth One provides examples of the following tropes: