Spit Out a Shoe 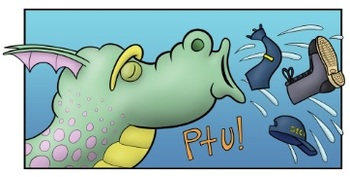 Alice is a giant chasing Bob, who has on a pair of distinctive looking shoes. Despite his best efforts, Alice manages to catch Bob and eats him alive. However, Alice notices that Bob had left one of his shoes behind in her mouth. She rolls the item around on her tongue before spitting it onto the floor.

After something, either a humanoid being or a ravenous creature, eats someone, it tends to spit out something that belonged to that person, often a piece of clothing the victim had on or something he or she was carrying on his or her person. This is often Played for Laughs or is used as a way to show that the victim is down for good. For some reason, shoes are a popular choice. Another common variant is to have the character who did the eating burp up the shoe of whoever they ate rather than deliberately spitting it out. A sibling trope to Losing a Shoe in the Struggle. May overlap with Dead Hat Shot in some cases. In some ways this can be used to show that whoever was eaten is gone for good. Apparently a giant woman eating a guy doesn't have as much "he's gone for good" punch unless she finishes it by spitting out his destinctive looking shoes.

Compare Burp of Finality, which is similar to this trope, but lacks the clothing or item aspect. That said, as mentioned above, the two overlap a lot because it's very common for the last remnant of the victim to be expelled with a belch. Though just like with the aforementioned other trope, non fatal examples do exist.

Is not related to Too Spicy for Yog-Sothoth as that involves the thing that did the eating being forced to regurgitate the character because they were harmful to them. Here, it means that they enjoyed their meal.