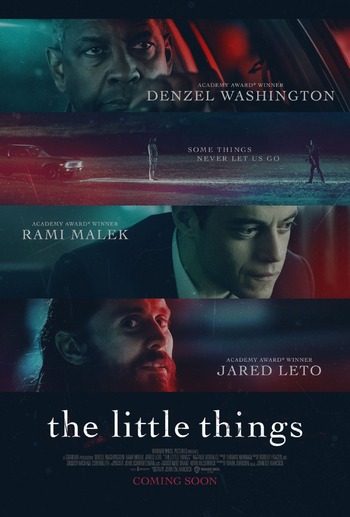 The movie takes place in October 1990 when Kern County Sheriff Deputy Joe "Deke" Deacon is tasked to head to the Los Angeles Sheriffs Department to secure forensic evidence related to an active murder case. He later joins LASD Detective Jim Baxter to the scene of a murder case, which reminds Deke of a similar case he once worked on when he was with the LASD.

Meanwhile, a woman named Ronda Rathbun was declared missing one night after being followed by a suspicious vehicle. The LASD leans on a few suspects before Albert Sparma is brought in a suspect since he was near some of the murder scenes.

With the FBI being called in, Baxter decides to go and ask Deke for assistance in solving the case. However, he was warned that he shouldn't go down the same path like Deke did... obsessed and determined to get the suspect.

The Little Things contains examples of: