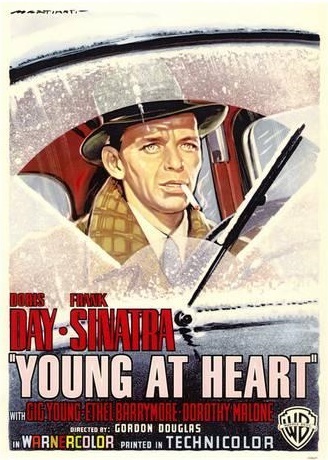 Young at Heart is a 1955 musical film directed by Gordon Douglas, starring Doris Day and Frank Sinatra, and featuring a supporting cast including Gig Young, Ethel Barrymore, and Dorothy Malone. The film a remake of the 1938 film Four Daughters.

When songwriter Alex Burke (Young) enters the lives of the musical Tuttle family, each one of their three daughters — Laurie (Day), Fran (Malone) and Amy (Elisabeth Fraser) — falls for him. Alex's charming personality is a particular match for Laurie, and the two of them are seemingly made for each other. But when Alex's music arranger friend Barney Sloan (Sinatra) drops by the Tuttle home, complications arise. Barney's cynical outlook on life couldn't be any more contradictory to Alex's, so Laurie endeavors to change his negative attitude... which leads Barney to start falling in love with her.