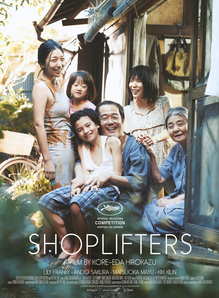 "Sometimes it's better to choose your own family."
Advertisement:

Shoplifters is a 2018 Japanese drama film by Kore-Eda Hirokazu. It received several awards including a Palme d'Or.

Shota is a kid who helps his uncle Osamu do some shoplifting to support the whole family: Osamu's wife Nobuyo, her sister Aki, and their grandmother Hatsue. They are quite poor. One day they find a little girl named Yuri out in the cold, who is obviously being abused by her parents, and they decide to take her home with them instead of returning her to her parents.

This film makes some shocking revelations at the climax, so several tropes names are spoilers. Indeed, some of the above description is misleading.