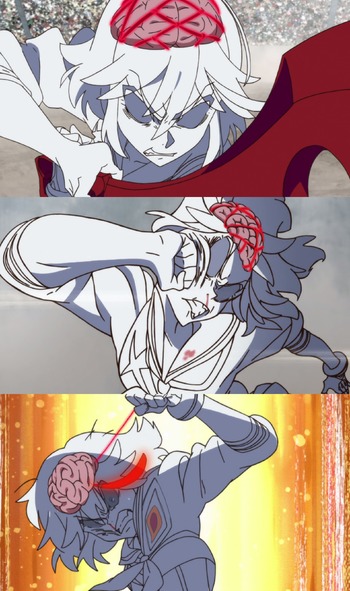 Who needs life fibers when you're pissed off?
"It's rare. It's something that doesn't happen within 100 years, but every once in a while, a Beta can become an Alpha without having to steal or take that power. They call it a True Alpha. It's one who rises purely on the strength of the character, by virtue, by sheer force of will."
— Dr. A. Deaton, Teen Wolf
Advertisement:

The worst has happened; The Hero has not only been infected by the Big Bad with the soul eating virus, but their determined resistance looks like it's about to finally peter out. Just as his friends, family, and significant other look on in growing horror as he becomes a monster and turns to eat them... he doesn't. Even though The Virus has their body and maybe even their mind, it doesn't have their heart or soul. Through sheer grit, or to protect a loved one, they manage to not only resist the lure of The Dark Side, but use Evil Is Cool against itself. They may become far stronger than a typical Virus-afflicted, especially if young vampires/werewolves/monsters of that kind are weaker than old ones like the Big Bad and under their control.

The hero who manages to reverse the curse and uses their newfound powers to fight the Big Bad and their Dragon, and beat them at their own game as a Vampire Refugee. Usually, doing so manages to break whatever curse they're under thanks to No Ontological Inertia — except when it doesn't. If so, or if they choose to stay infected to fight other monsters (as borderline Zombie Infectees) they end up Cursed with Awesome or become a Friendly Neighborhood Vampire pursuing the path of the Ascended Demon.

The power up gained with Heroic Willpower sometimes manifests by becoming a One-Winged Angel or with a move up the Bishōnen Line, visually distinguishing them from rank and file infected. Incidentally, despite the name, this isn't exclusive to heroes; the Determinator is a classic villain archetype, after all.

The internal struggle is often verbally indicated by the character gaining the Voice of the Legion, paired with physical and verbal tics like biting off each word in a loud (or even shouting) voice in a Punctuated! For! Emphasis! manner. When Played for Laughs the character will Lampshade this by saying something along the lines of "Must. Speak. Like. William Shatner!"

A Sub-Trope of Heroic Spirit.

Contrast with Fight Off the Kryptonite and Monsters Anonymous.

See also Sheep in Wolf's Clothing, Clap Your Hands If You Believe, Cursed with Awesome, The Dark Side, Evil Is Cool, No Ontological Inertia, The Virus, Viral Transformation, Doomed Protagonist.