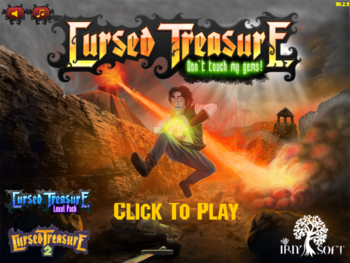 Cursed Treasure: Don't Touch my Gems! is a flash Tower Defense game. You play an Evil Overlord, and trying to prevent your gems from being stolen by adventurers, you use three different types of "towers" inhabited with Always Chaotic Evil minions to slay them, assisted by various spells. The game consists of replayable stages, and has RPG Elements in the way of skills enhancing your towers or spells in some way, which are purchased with Experience Points.

, which is Exactly What It Says on the Tin, and Cursed Treasure 2

, a total revamp with a greater variety of enemies (including full-fledged bosses) and a new, "cute" aesthetic. Cursed Treasure 2 was also released on Steam.