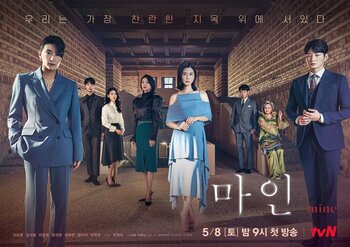 Mine is a Korean Drama that originally aired in May and June of 2021. It ran for 12 episodes.

It centers around the Han family, the filthy rich owners of a conglomerate called Hyeowon Group. Hi-soo, wife of second son Han Ji-yong, visits an orphanage that the family sponsors. Mother Emma, the nun who runs the orphanage, gets Hi-soo to offer a job to Kim Yu-yeon, a teacher at the orphanage who is deeply in debt. Yu-yeon, who is mild-mannered and dresses modestly, agrees to work for the Han family as a maid. Hi-Soo's sister-in-law Seo-hyun, wife to first son Han Jin-ho, goes looking for a tutor for Ha-joon, Ji-yong's son. She hires Kang Ja-kyung, who is more flashy and assertive than the other new hire, meek Yu-yeon.

At a sumptuous banquet—the Han family is so damn rich that each guest at dinner gets their own waiter—patriarch Han Suk-chul announces that the dinner is the last time the family will celebrate "her". He then says that he is bestowing a gift, and the servants bring out an enormous blue diamond. Before Suk-chul can give out the diamond, a servant whispers something into his ear. Whatever it is, Suk-chul is horrified. In fact, he collapses, and falls into a coma.

Arriving back home shortly after this incident is Han Soo-hyuk, who looks to be of college age and is son to Jin-ho. Soo-hyuk and Yu-yeon can't stop sneaking glances at each other, and the sexual tension is obvious.

But before all of the above, the first scene, set some 60 days after the chronological start of the story, has Mother Emma leaving a funeral to go to the police. She reports that there's been a murder.