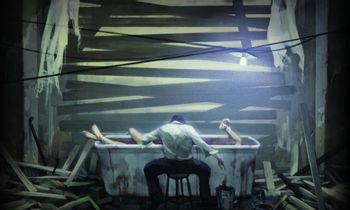 Hayarigami 2 (Officially known as 流行り神2警視庁怪異事件ファイル - Hayarigami 2 Keishicho Kaii Jiken Fairu — Sudden Popular God 2 Tokyo Metropolitan Police Department Strange Case Files) is a Survival Horror Visual Novel game in the Hayarigami franchise made by Nippon Ichi and the sequel to the first Hayarigami game. It was not released outside of Asia.

It was first released for the Playstation 2 on November 15, 2007 with a "Best Price" version released on June 18, 2009. The PSP port, known as Hayarigami 2 Portable - Keishicho Kaii Jiken Fairu (流行り神2Portable警視庁怪異事件ファイル — Sudden Popular God 2 Portable Tokyo Metropolitan Police Department Strange Case Files) was released on August 7, 2008 with a digital release on July 16, 2009. A DS port, known as Hayarigami 2 DS - Toshidensetsu Kaii Jiken (流行り神2DS都市伝説怪異事件 - Sudden Popular God 2 DS - Strange Urban Legend) was released on July 9, 2009. All the games were a C rating by CERO for its mild violent content. To promote the game, the eight short movies featured on its website was compiled on a DVD bundled in the limited edition version.

The game takes place one year after the events of Hayarigami. One day, Junya Kazami bumps into Yukino Kasuga, an Old Flame of his from his younger days in high school. She explained that she went to the TMPD building to claim the remains of her deceased husband. When he and Kogure offer Kasuga a ride to her house, she narrated how her husband's suicide was related to his company going bust recently. Kazami decides to investigate the case again in his capacity as a Historical Archives Section detective and determine if he did die under a suicide or not. Meanwhile, the suicide of a female high school student was discovered early in the morning...

The gameplay mechanics from Hayarigami game returns with everything intact.

in Japanese by kandekyu. It's incomplete, however.