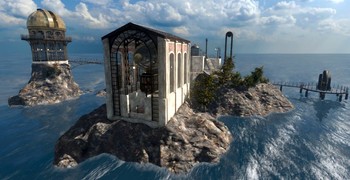 Haven Moon is a first-person adventure game that was released on Steam in 2016. It was created by Francois Roussel who had been inspired to make the game over 20 years earlier by Myst (as well as the works of Jules Verne).

The player character finds themselves on a series of small islands populated only by bizarre structures and mechanisms. Through exploration, you discover that you are on a moon planet called Seleos, which is in orbit of the planet Menra. Everything you see is the work of a scientist named Ektor Turren who has mysteriously vanished. Your only goal is to explore Seleos in the hopes of finding a way to leave.