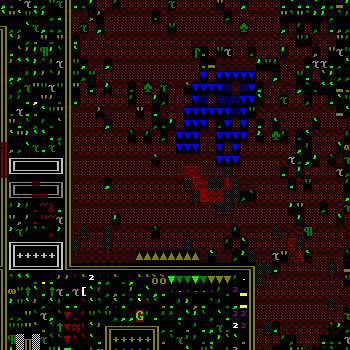 The year is 251. The dwarven civilization of the Massive Room has launched several expeditions to distant corners of the globe in search of wealth and amusing stories of death, because that is simply what dwarven civilizations do. One of those groups ended up in... this place. Either they got lost, or they really pissed off their guide.

The primary feature of the landscape is the weather pattern dubbed the "evil gloom", a mass of fog that passes over the landscape and induces profuse bleeding followed by death in anything unfortunate enough to get caught up in it. Flocks of giant insects flit across the landscape, and two ocean inlets beat against their narrow shores.

Anyone with an ounce of sense would keep going; dwarves are not known for being sensible. They leapt out of the wagons and burrowed into the earth below, naming the resulting (literal) hole in the ground "Waterburned".

Then the overseers came, and the world was never the same again.

. The game has been concluded; however, the saga continues in the fortress of Beigeknife.