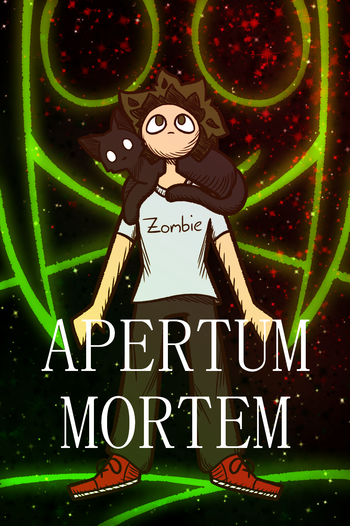 Cover created by Axobunny
"There are always going to be constants in the world, but even those change with time. Don't ever be afraid to take a chance to be one of those changes."
— The Elderly Man to Midoriya Izuku
Advertisement:

Izuku has always had secrets. The first one he ever kept was of his mother's training sessions after the doctor's visit. Being quirkless was never a willing choice he got to make in more ways than one. The second secret he ever kept you ask? His quirk.

Or: Izuku grew up facing more than just discrimination.

that can be read here

Apertum Mortem is the first part of the Dum Spiro Spero series. The second part of the series, Memento Mori, can be read here

Note: Proceed with caution as there are major spoilers under the clickable parts. There are also very triggering topics covered in the fic, so tread carefully.

open/close all folders
Tropes A to F
Tropes G to M
Tropes N to S
Advertisement:
Tropes T to Z