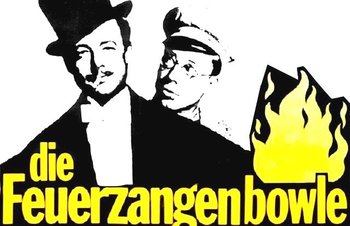 Die Feuerzangenbowle is a 1933 German novel by Heinrich Spoerl of which three film adaptations were made. The second one (b/w) from 1944 (sometimes called The Punch Bowl in English) is actually the best-known one, which is why this article will be based on this film instead of the book. That 1944 film is very close to the book, and it is also notable as (within Germany) possibly the most enduringly popular movie from Nazi Germany.

The plot: The young but already successful playwright Dr. Johannes Pfeiffer (played by German star Heinz Rühmann) meets his friends, some older men who are sitting together, drinking the eponymous Feuerzangenbowle

and reminiscence about their school time, the fun they had, the pranks they played on their teachers... then, Pfeiffer (with three "f") confesses that he never went to a school, having had private teachers instead, and missed all the fun. So the others suggest him jokingly (and under the influence) to disguise himself as a student and go to a school, just for a few weeks, to know how life at school is - in the small German city of Babenberg, where nobody knows about the famous author Pfeiffer. Hilarity Ensues.

You can watch the movie for free on archive.org, here