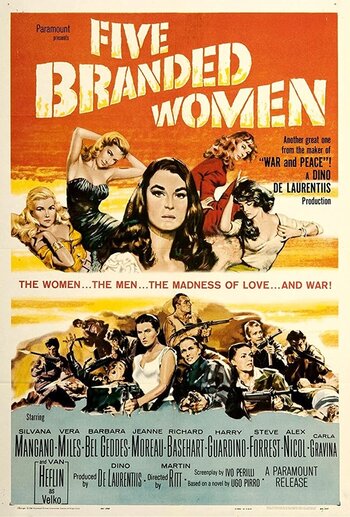 Five Branded Women is a 1960 American-Italian war film directed by Martin Ritt, starring Silviana Mangano, Vera Miles, Barbara Bel Geddes, Jeanne Moreau, and Carla Gravina as the titular quintet. These days it's mostly remembered for being the reason why Vera Miles had to wear a wig while appearing in Psycho.

The film follows five women from a Yugoslavian village during World War II — Jovanka (Mangano), Ljuba (Moreau), Daniza (Miles), Marja (Bel Geddes), and Mira (Gravina) — all of whom slept with the same German soldier. As punishment, the villagers shave the women's heads and exile them from the village. The five band together and eventually join the partisans.