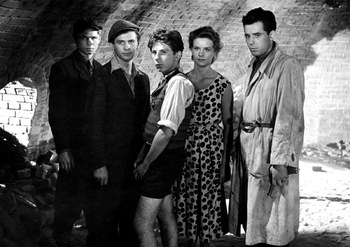 Roman Polanski in shorts: The horror.

A Generation is a 1955 film directed by Andrzej Wajda, making his feature film debut.

Poland, 1942, during the Nazi occupation. Stach Masur is a young man in his late teens living in a slum on the outskirts of Warsaw. Like every other Pole, he hates the Nazis, but his acts of rebellion are limited to stealing hunks of coal from German trains bound for the war with Russia. That all changes, however, when he gets a job as an apprentice at a furniture factory. Stach is surprised to learn that the factory is a hub for resistance activity, although Berg the factory owner is skittish about keeping weapons on the property.

Sekula, another worker at the factory, turns Stach on to a cool guy named Karl Marx. Sekula takes Stach to a clandestine meeting of communists, led by a gorgeous young woman named Dorota. Under Dorota's leadership, the cell begins actively fighting against the Germans, assassinating German officers and helping Jews escape the Warsaw Ghetto Uprising.

Part of a loose "war trilogy" by Wajda that includes Kanał and Ashes and Diamonds. And yes, that's a 22-year-old Roman Polanski, in his first film role as Mundek, one of Stach's young friends who joins the resistance.