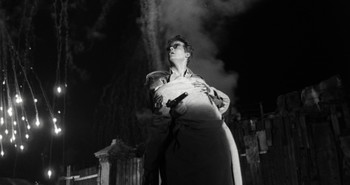 Ashes and Diamonds (Popiół i diament) is a 1958 film directed by Andrzej Wajda.
Advertisement:

It is May 8, 1945, the last day of World War II. The Nazis were ejected from Poland months before but the Soviets are asserting control. Two "cursed soldiers

" of the anti-communist Polish Home Army, Maciek and Andrzej, have been sent to an unnamed town to assassinate the local Communist Party secretary, Szczuka. They ambush Szczuka's car and shoot him, then go into the town to report to a superior.

They find to their unpleasant surprise that they killed two random locals and Szczuka has arrived in town alive. Szczuka is there to attend a ceremony in honor of the new Communist mayor, Slomka. Maciek and Andrzej have an ace in the hole in the form of Drewnowski, Slomka's assistant, who is giving them inside information. The two men get a room in the same hotel as Szczuka and wait for a second chance. Meanwhile, Szczuka is looking for the son he hasn't seen for years (they were separated by the war), who is now seventeen and said to be serving in the Home Army.

Part of Wajda's loose war trilogy that included A Generation and Kanał. It is a remarkably subversive film, celebrating the anti-communist resistance of what was left of the Polish Home Army, made in 1958 during Communist rule in Poland.