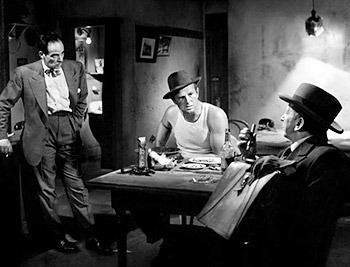 The Asphalt Jungle is a 1950 Caper crime drama directed by John Huston, based on the novel of the same name by W. R. Burnett. It was the first major example of this trope while simultaneously being a deconstruction of it. It's also considered a classic of the Film Noir genre with an ensemble cast including Sterling Hayden, Jean Hagen, Sam Jaffe, Louis Calhern, James Whitmore, and, in a minor but key role, Marilyn Monroe, an unknown at the time who was pictured but not mentioned on the posters.

After getting out of prison, Erwin "Doc" Riedenschneider goes to Cobby, a bookie, with an idea for a diamond heist. Cobby puts him in touch with Alonzo Emmerich, a crooked lawyer, who agrees to front Doc and his crew in the heist, who eventually include Dix, a "hooligan" who's been in and out of prison, his friend Gus, who runs a diner, and Louis, a safe-cracker. What none of them know is Emmerich, who has money troubles, is looking to double-cross the gang by taking the diamonds for himself.

A solid (though not spectacular) hit when it was first released, Huston's film is now considered one of the classics in its genre, and one of the most influential Film Noir ever made. Trope Maker for The Caper and the heist film genre, inspiring several more heist films throughout the decade, including Stanley Kubrick's The Killing, Jean-Pierre Melville's Bob Le Flambeur, and Jules Dassin's Rififi.