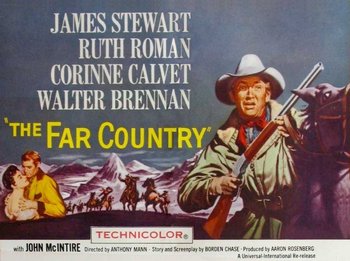 Stewart plays Jeff Webster, who arrives in Skagway, Alaska with a herd of cattle during the height of the Klondike Gold Rush. Jeff and his partner, Ben (Walter Brennan), mean to drive the cattle to Dawson, Yukon Territory, and sell beef to the gold miners for a fat profit. However, Jeff runs afoul of Skagway's self-appointed "Judge" Gannon (John McIntire), who is really the local crime boss. Gannon seizes Jeff's cattle as "government property".

Local saloon owner Ronda Castle (Roman), Gannon's business partner, is taking the seized cattle to Dawson, and hires Jeff as the cattle driver. Jeff agrees, but under cover of darkness he steals the cattle and sets off to Dawson for himself. Jeff gets the herd to Dawson and sells them to Ronda, who is setting up a new saloon in Dawson. Everything seems well for a time, until Gannon and his goons also come to Dawson. With Dawson a disorganized mining camp that lacks law enforcement, Gannon and his men are free to take over the town—until Gannon forces a confrontation with Jeff.