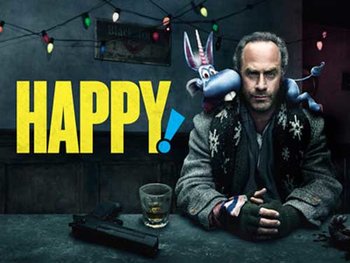 Happy! is a violent dark Black Comedy/Drama series on the Syfy network, adapted from a Grant Morrison comic miniseries - Happy!. The show is headlined by Brian Taylor, one of the directors of the Crank series. The show combines that franchise’s over-the-top violence with the Buddy Cop Show formula, creating a darkly surreal world where criminals battle it out on the streets of New York and a flying horse is the guardian angel of a child.

The show follows Nick Sax (Christopher Meloni), an alcoholic former cop turned hitman who must team up with his daughter's imaginary friend, a tiny winged unicorn named Happy (voiced by Patton Oswalt) to take down nefarious holiday-themed conspiracies and perversion of the most deranged variety. Season 1 has him tracking down a Bad Santa who has kidnapped his daughter during the Christmas season. Season 2 fast-forwards to Easter, where Nick must contend with a plot to wake The Antichrist on Easter Sunday.

The show ran a total of two seasons.