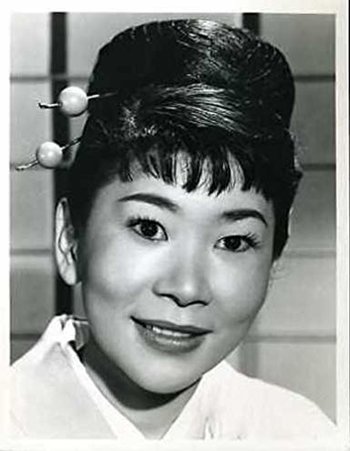 Miyoshi Umeki (May 8th 1929-August 28th 2007) was a Japanese-American actress, who has the distinction of being the first actor of East Asian descent to win an Academy Award.

Born in Otaru, she got her start in show business as part of a GI jazz band with the US army - traveling and performing all around Japan. She was especially proficient in singing American style pop songs, and became quite popular on the radio and at nightclubs. Her popularity led to a move to America in 1955 - and she made her screen debut on the musical Variety Show Arthur Godfrey and His Friends. Her fame was about to skyrocket however.

The Marlon Brando vehicle Sayonara cast Miyoshi in a supporting role as Katsumi - a Japanese woman who marries an American Ace Pilot, and features persecution for it. The film was a hit, and Miyoshi won the Best Supporting Actress award at the 1957 Oscars. As of 2019, she is the only East Asian performer to win an Oscar. She was then cast as the lead in Rogers & Hammerstein's Flower Drum Song and reprised her role in the film adaptation - which became the first Hollywood film to have an all-Asian cast.note Not completely; Madam Liang was played by the African-American Juanita Hall, and a caucasian mugger appears midway through.

Following film and television appearances throughout the 1960s, she achieved another notable role in The Courtship of Eddie's Father as Mrs Livington - the Japanese housekeeper. However, she announced a retirement from acting at the end of the 1960s, and spent the rest of her life running an editing business with her husband. She died of cancer in 2007.