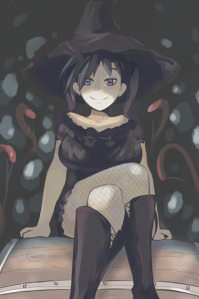 The Chestiest Chest That Ever Chested
"The irony of a genderless creature with zero sex drive somehow surrounding itself with all manner of lewd women was so thick that one would probably need to dig through it with a pickaxe."
Advertisement:

Large chests are said to encompass all manner of hopes and dreams. Men covet them. Women envy them. But one fact holds true — everyone wants to get their hands on some big ones.

The same holds true for one intrepid adventurer — a strapping young lad by the name of Himmel. Armed with his grandfather's trusty longsword and the dream of being the strongest, he sets out on the journey of a lifetime! It is sure to be a long and dangerous road, fraught with danger! And it all starts with a simple test — reach Level 5 in the dungeon called the "newbie zone" and earn the right to become a full-fledged adventurer!

However, such things get hopelessly derailed when his adolescent mind beholds an exposed chest for the first time. A fateful meeting that would inevitably lead his life in a direction he never even dreamed of!

Please proceed with caution while reading the page, as there are plenty of twists and turns in this story, and tropes on this page can cause spoilers.

This fiction provides examples of: