Literature / Factory of the Gods 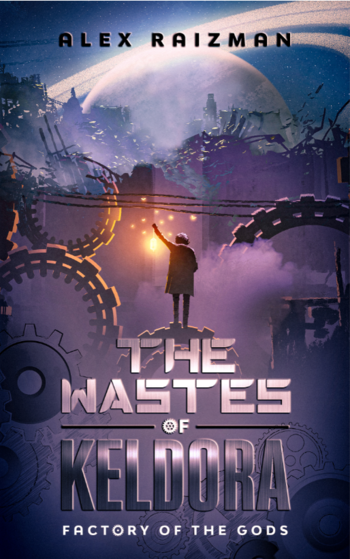 Fantasy tech vs. gods
"Remember when I asked you if the Godcore could bind to a mind that wasn’t actually alive? Well, this is why I asked. It’s a cellphone. You can use it to do a lot of things, including talking to people who are anywhere on the world if they have one of their own. At least, on my world. It won’t work here. But it also has a computer, which is a kind of...very complex mechanical adding device. And apparently, if an adding device gets complex enough, it counts as a brain."
— Julian
Advertisement:

Factory of the Gods is a series of novels written by Alex Raizman, aka Hydrael. It stars Julian, a down on his luck inventor who is summoned to a fantasy world. He was supposed to pick up a Godcore to gain divine power. Instead, the magic rock got stuck to his phone. He uses his now enchanted phone, which operates on video game logic, to build a factory to aid the people of the wastes in their battle against a whole pantheon of gods and adventurers.

Factory of the Gods contains examples of: