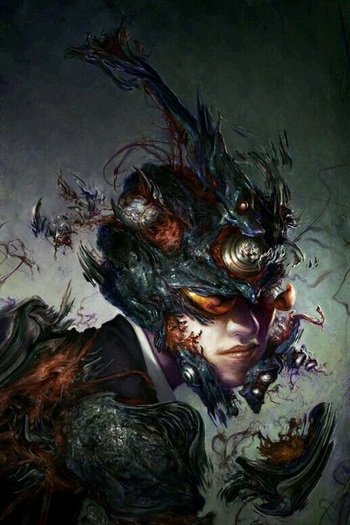 This supposed to be armor to fight with. But...
Advertisement:

There's Powered Armor, and then there's this... thing. The Organic Technology equivalent.

Leaving aside the fact that you're essentially wrapping a living being around yourself, it often forms some sort of symbiotic connection with the wearer, often drawing nutrients from the wearer's blood. Needless to say that might have adverse side effects.

Things can be pretty bad for the wearer if this is combined with Clingy Costume, either because the armor doesn't want to let the user go, or because the process of grafting a living armor suit to a human host is irreversible. An even worse version might be sentient, and capable of taking over.

Might be worn by a Heroic Host. Might sometimes be able to turn into an Animated Armor. Subtrope of Organic Technology. Compare Living Weapon, a creature used as a weapon; and Living Clothes, clothing that has a mind of its own, though it may not necessarily be an actual organism in itself.