The Taming of the Grue 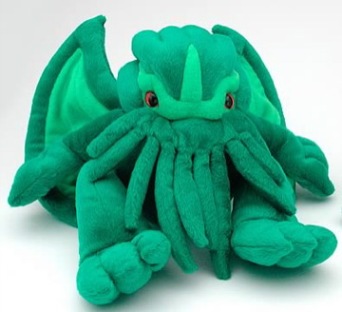 H. P. Lovecraft must be rolling in his grave... Or at least banging his head on a wall really hard.

Monsters exist all over folklore. Dragons, vampires, werewolves, etc. And usually, they start out as Always Chaotic Evil as they come, or even just mindless beasts who destroy because they don't know any better.

Except, as a particular monster gets more popular, it has a tendency to get less... monstrous. Dragons (which at least in Western mythology were once giant, winged, fire-breathing lizards that burned villages and were slain by knights) first got more intelligent, then more likely to be a "not really a monster" subversion, until, in the modern era, stuff like Dragonheart and Pete's Dragon are nothing to bat an eye at. Similarly, orcs - who were invented for The Lord of the Rings to be bred evil (and mostly stupid) often appear as "noble savages" after just eighty years.

There are also cases where said monster is modified in order to appeal to younger demographics (and otakus) by making him (or her) more cute, huggable, and so forth.

In short, this trope is Villain Decay on the species level - what happens when Our Monsters Are Different turns the exception into the rule.

See also Adorable Abomination, Cute Monster Girl, You Sexy Beast, Lovecraft Lite, Disneyfication. Friendly Neighbourhood Vampire is a subtrope of this. Did We Just Have Tea with Cthulhu? can lead to this effect if done often enough. Not to Be Confused with the plot of Despicable Me.

To avoid ranting, examples list should only be those contained to be a single franchise or canon: