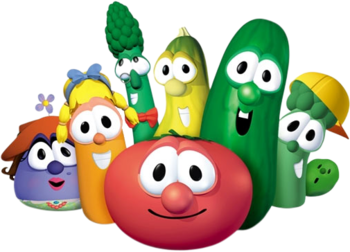 Front and center: Bob the Tomato. Behind him, L - R: Madame Blueberry, Laura Carrot, Archibald Asparagus, Jerry Gourd, Larry the Cucumber, Junior Asparagus, and one of the Peas.
"If you like to talk to tomatoes,
If a squash can make you smile,
If you like to waltz with potatoes,
Up and down the produce aisle...
Have we got a show for you!"
Advertisement:

What's the best way to teach Christian values to children, short of a talking lion? Through semi-anthropomorphized God-loving vegetables. Obviously. Why vegetables? Well, they're good for you, and what child wouldn't want to munch on versions of their favorite characters? But mostly because they didn't originally have the budget for CGI that could handle complex characters. After all, if you make a green sphere and call it a pea, who's to argue?

Silly songs, talking vegetables, and plots taken from The Bible make for much better entertainment than you might expect — aided considerably by a cast the size of a produce department, and a healthy seasoning of slightly demented and honestly funny writing heavy on good natured snark, Parental Bonuses, and fourth-wall-leaning, and light on the Anviliciousness. Notable characters include LarryBoy, the immensely quotable Badbutt suction cup-themed superhero, Buzzsaw Louie, the toy that saved Christmas, and The Pirates Who Don't Do Anything, pirates who...oh, you would probably know by now; they would later receive their own movie.

The result is a just-self-aware-enough Fountain of Memes that has saved the sanity of more than a few babysitters in the church nursery, and broken out of the double ghetto of G-Rated Christian Media to a surprising degree. This is essentially Silly Rabbit, Cynicism Is for Losers!: the series.

The show is an astonishing Long Runner for its genre, with its first installment released 'way back in 1993 (yes, folks, way before more mainstream CGI pioneers like ReBoot and Toy Story). Early videos used the format: Introduction by Bob the Tomato and Larry the Cucumber talking about some issue (e.g. anger at siblings, materialism, not learning to share, not telling the truth, wouldn't help others, won't be patient or confident, etc.), sometimes prompted by a viewer letter; short story which illustrates the issue; silly Intermission, usually in the form of "Silly Songs With Larry"; another short story; discussion of the moral and relevant verse, the latter provided by QWERTY the computer. Later installments began using one long story with "Silly Songs" at the intermission. Currently, a given video could be either of these formats or simply be a single long story with no introduction, intermission, or theme song. Usually longer now than the Theme Song's claim of "half an hour" (which a recent updating of the opening removed).

The video series ended with Noah's Ark in 2015 and the Netflix spinoff was cancelled in 2017. In the spring of 2018, Phil Vischer, Mike Nawrocki and Kurt Heinecke, all of whom have been with the series since its first episode, all independently confirmed that there are no future plans for the series, with or without their involvement. And on what would have been the series' 25th anniversary, to boot. After production ended, DreamWorks Animation, parent company of VeggieTales studio Big Idea Entertainment, closed the studio's main Nashville offices, with the company only existing as an In Name Only unit of DreamWorks to handle intellectual property claims and licensing to the VeggieTales franchise and related properties.

Not long after that, in March 2019, TBN (which had been airing VeggieTales material for some time) announced that it had ordered new episodes for the franchise, with Vischer and Nawrocki returning as writers for the new episodes. The announcement trailer for the relaunch (under the title: The VeggieTales Show) can be seen here

. The new series will bring back the original character designs and Mr. Nezzer, and eliminate pretty much every reminder of In the House/City. Lisa Vischer is also returning to voice Junior and other roles, and it has been reported that Kira Buckland, of all people, will also be voicing characters in the series. But two years later after more VeggieTales content was available on Yippee TV, DreamWorks's owner NBCUniversal decided that the show's creators (and many of the show's crew) were dismissed from Big Idea leading to a unknown future for the franchise. This was mainly due to the advent of their Peacock streamer and their ongoing efforts to improve many of their major franchises. In 2022, the show moved to Minno.

References and parodies plots from The Bible, The Grapes of Wrath (God Wants Me To Forgive Them?!, with literal grapes of wrath), Gilligan's Island (God Wants Me to Forgive Them?!), Star Trek (Are You My Neighbor?), Batman (Larry Boy), Madame Bovary (Madame Blueberry), Gilbert and Sullivan (Lyle the Kindly Viking), Indiana Jones (Minnesota Cuke), Hamlet (Omelet), The Lord of the Rings (Lord Of the Beans), The Wizard of Oz (The Wizard of Ha's), Sherlock Holmes (Sheerluck Holmes), and all kinds of others.

A Recap page is currently under construction.

open/close all folders
Tropes A to I
Tropes J to R
Tropes S to Z
Waldorf: This show makes me nervous about what we do.
Statler: Got anything to be ashamed of?
Waldorf: No, I'm just worried that one of the tomatoes we throw might say "Ow!"
Both: Do-ho-ho-ho-hoh!
Remember tropers, God made you special, and He loves you very much. Bye!
Feedback