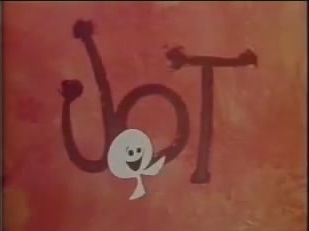 JOT, also known as JOT the Dot, is an American animated TV series made by the Southern Baptist Radio and Television Commission as a Baptist equivalent to Davey and Goliath (yes, they made a moral substitute of a Christian cartoon that was already a moral substitute of Gumby made by the creator of Gumby). It aired from 1965 to 1974 and was syndicated throughout the United States.
Advertisement:

The show stars Jot, who is nothing more than a white circle with hands and feet. Jot would learn about various Bible teachings in each episode, usually the teachings that indicate what actions are considered a sin. Other usually unnamed characters appear throughout the series as well, and they all look exactly like Jot apart from at least one change, usually hair on their heads.

The TV channel FamilyNet used Jot as its mascot until 2014. During this time, they aired episodes of JOT as part of their "Families on FamilyNet" block. However, episodes were edited by the channel to be 2 minutes long instead of of the original 4 minutes.