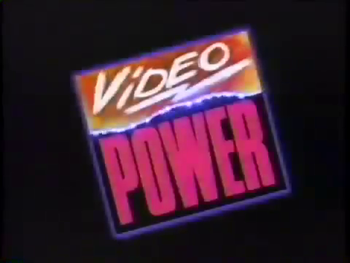 Video Power is an early 1990s show (produced by Saban Entertainment and Bohbot Entertainment) that attempted to take what kids supposedly liked about Captain N: The Game Master while having segments talking about actual game tips and reviews to make it clear they knew what they were talking about. It was hosted by the exuberant Johnny Arcade (played by Stivi Paskoski), and made up of various segments:

For its second season, the show was completely overhauled into a Game Show where contestants earned points and prizes by playing a game of the day well, or answering trivia questions about current video games (essentially Starcade with late 80s/early 90s games); the format was tournament-based with "Friday Playoffs," and Johnny was now joined by co-host/announcer Terry Lee Torok and bandleader/keyboardist Steve Treccase (previously of Remote Control). Here's how this version of the show worked:

The Video Power Edge segments were retained from the old format, and new Hot Flash segments were added to give info on news about consoles and arcade machines. In the earlier episodes, Johnny also read fan letters; this was excised over time.

The first season (including The Power Team) provides examples of the following:

The second season had the following game show tropes in use:

The second season provides examples of the following: