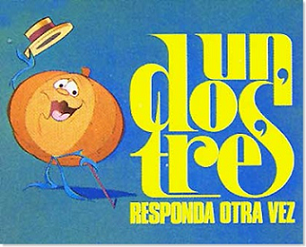 Un, dos, tres... responda otra vez (One, two, three... answer again), usually shortened as just Un, dos, tres, was a Spanish game show that first aired on TVE in 1972 and quickly became pants-crappingly popular among Spaniards. The show lasted ten seasons, and, not counting skips between seasons, was on the airwaves for a whopping 20 years, having a grand total of 411 episodes (so far, as it just won't stay dead).

The show followed a basic structure: Each episode was dedicated to a specific topic, for example, the French Revolution or the Far West, or Broadway Musicals, etc. In every episode, there were three (four in the first and second seasons) couples, two (three in the first seasons) being new to the show, the other one being the winners of the previous episode (the "champions"). Except in the 10th season, couples had to be of male and female, but they could have any relationship: romantic partners (married or not), siblings, father and daughter or mother and son (and any other kind of family relationship), coworkers, friends, etc. These couples had to pass through three "rounds":

The key to the programme's success was the fact that, instead of true game show, it was more of a Sketch Comedy masquerading as one. The programme had a cast of countless cartoony characters on board, with the main ones being divided into the "positive side", consisting on the presenter and a bunch of Sexy Secretaries, and a "negative side", characters who opposed the contestants and wanted them to lose, and would announce when they had ran out of time or made a mistake. Traditionally hailing from the fictional village of "Tacañón del Todo", the negative side, consisting of the miserly Don Cicuta and Los Cicutillas in the first season, Los Tacañones, which were pretty much Don Cicuta split into three characters, in the second season, and Las Tacañonas, from seasons three to nine, were, despite their role, adored by the audience due to their antics.

Another staple of the series was the mascot, Ruperta the pumpkin, who was introduced in the second season and quickly became the face of the show. Apart from singing the intro tune

in a memetically high-pitched, screechy voice, Ruperta would also traditionally appear (usually) as a Whammy/Zonk in every episode's auction round. Although the show had other mascots during it's run: Botilde the boot, El Chollo, bringer of good luck, and El Antichollo, his Evil Twin, and El Boom & El Crack, none of them managed to achieve Ruperta's popularity.

After ten years of hiatus, the show was revived in 2004 as Un, dos, tres... a leer esta vez ("One, two, three, now it's time to read"), which, while sticking to the show's formula, made certain noteworthy changes: The show was now focused on reading and literature, and the eliminatory round, instead of focusing on physical challenges, now consisted of answering questions about the "book of the day", hence the contestants had to read the book if they wanted to pass it. In keeping with the literary theme, the "Tacañón del Todo" "negative side" characters were replaced by book-burning firemen from the "Fahrenheit 451 Brigade", who wanted to purge the world of written literature. The "Fahrenheit 451 Brigade" initially consisted of Colonel McPhantom and his mute assistant Kowalsky, but they weren't very popular among the public, so, after four broadcasts, they were replaced by General Antilivroff and Dimitri, who spoke Russian-sounding gibberish and were overall much sillier and more in the vein of the "Tacañón del Todo" characters.

British tropers may find some similarities between this show and the ITV game show 3-2-1. It's no coincidence: 3-2-1 was based on Un, dos, tres, and they were both created by the same man. Un, dos, tres was also versioned in the Netherlands, Germany, Portugal and Belgium, and it was the first Spanish show to be exported outside of Spain, and the only one until the arrival of Operación Triunfo almost 30 years later.

In September 2022, a second revival was announced by production companies Prointel and Isla Producciones in association with GlobalStudio, this time aiming for a distribution in digital platforms.