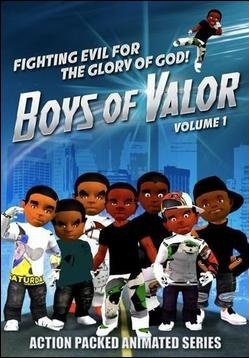 Pancaking in the name of Jesus!
Advertisement:

Boys of Valor is a 2013 Christian animated series created by junior art school teacher Daniel Bryant (no, not that one), which was designed to combine animation and faith in a way not seen before. Featuring younger versions of Bryant and his six brothers, they work as a team of superheroes who battle evil and spread the word of God.

However, it bombed upon release due to numerous issues— including its atrocious voice-acting (with one of the brothers literally phoning in his performance) and editing, poor animation* One of the 3D models was literally ripped straight from The Sims 3, and flat characterisation— and quickly faded into obscurity, only coming to attention after being reviewed on the internet. Nevertheless, it remains an interesting watch, even if just to get an idea of how not to do Christian children's entertainment.

For a more detailed review of the first two films, check out iRawss's reviews of them here

Boys of Valor contains examples of: