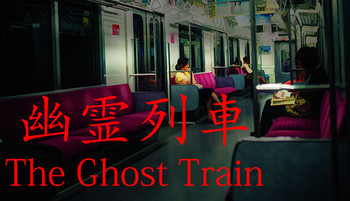 The Ghost Train is a short Horror Video Game by Chilla's Art.

Every night, Kensuke Tanaka takes the subway train back home. His usual routine for that always involves grabbing a drink from the vending machine, using the bathroom, and taking a smoke break. However, lately, as the nights go on, his usual ride home's been getting spooky.

The Ghost Train contains examples of: