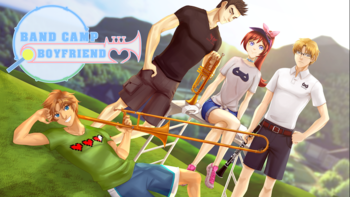 An upcoming otome Visual Novel by Lovebird Games, Band Camp Boyfriend follows this year's new drum major, Cadence, to band camp as she attempts to help turn around her high school's declining marching band (The Blue Mountain Bandits), prep them for competition, and perhaps find love amongst the band members. Its trailer first came out in 2017, and a demo was launched in 2018. The demo can be downloaded and other game information can be found here