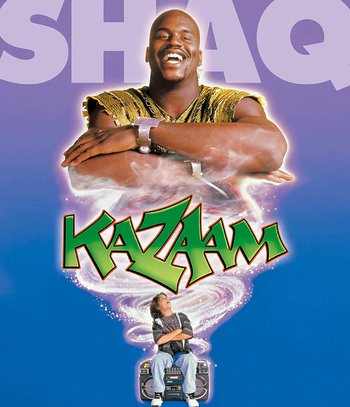 Let's Green Egg and Ham it!
Drew: You know, the one where Shaq plays a genie.
The Killer: That's not a horror movie.
Drew: Well, you haven't seen Shaq act.
— Scary Movie
Advertisement:

The alleged story is about a kid named Maxwell "Max" Connor (Francis Capra) who stumbles into an abandoned building and finds a magic boombox containing Kazaam (Shaquille O'Neal): an actual genie. Naturally, the kid doesn't believe what he sees but Kazaam eventually manages to convince him that he's a legitimate genie that will grant him three wishes. Meanwhile, Alice Connor (Ally Walker) Max's mother is about to remarry and decided to confess that his real father actually lives in the same city as them. So Max decides to find him. It turns out his father Nick Matteo (James Acheson) is a musical talent agent who later "discovers" Kazaam. His evil boss finds out Kazaam is a genie and tries to figure out how to claim this power for himself.

Not to be confused with Shazzan which was a cartoon about an heroic genie, or with the similar-sounding Shazam! who's a superhero. Nor is it to be mistaken for the fictional Mandela Effect-induced Shazaam, starring Sinbad in the titular role.