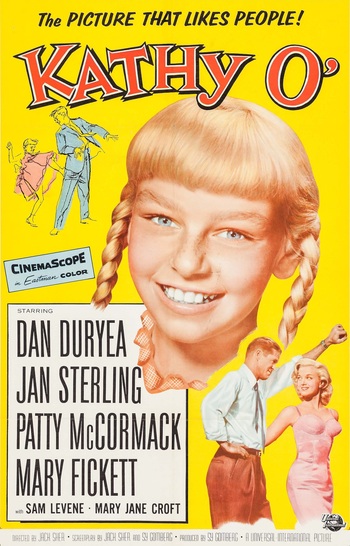 Kathy O' is a 1958 American comedy-drama film, directed and co-written by Jack Sher and starring none other than Patty McCormack. Yes, the very same one from The Bad Seed (1956), right down to the pigtails!

As you'll probably gather from looking over at that poster image, this film is a great departure from that one. But, anyhow...

Kathy O'Rourke (McCormack) is a child actress who often portrays sweet little girls in movies, but off-screen, she is anything but and acts like a spoiled brat. Publicity agent Harry Johnson (Dan Duryea) is hired with the task to not let word out of her disagreeable behavior to his ex-wife columnist, Celeste Saunders (Jan Sterling). Meanwhile, the insistence that Kathy make an appearance at the Christmas parade has made her more irritable, so Harry and Kathy make a deal that she'll act nice for Celeste in exchange for being pulled out of said parade. The deal leads to an unexpected friendship between Kathy and Celeste... so much so that the former runs away to be with the latter, causing Harry to be suspected of kidnapping.