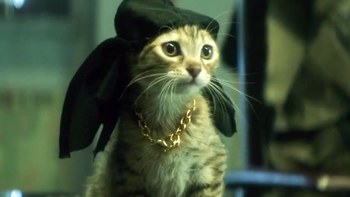 Who's a good kitten?
Advertisement:

Keanu is a 2016 film starring Keegan-Michael Key and Jordan Peele, about two men (Rell, played by Peele, and Clarence, played by Key) looking to reclaim their incredibly cute cat from some gangsters who stole him. To do so, they pose as drug dealers, trying to earn the favor of the gang's leader. Along the way, they run afoul of a drug cartel and two silent psychopaths, all while trying to keep their activities from interfering with their normal lives. Tiffany Haddish also stars.

The film was originally screened at the South By Southwest Festival in Austin, Texas, where it received generally positive reviews, and opened to general audiences on April 29, 2016.