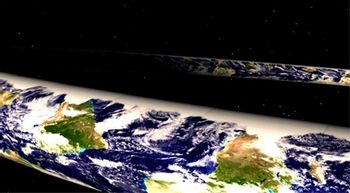 What the Earth would look like if video game maps were actually correct. Mmmm... toroids....
"The World Is Square"
— Final Fantasy VI note Specifically, it's the solution to a puzzle in-game: ERAU QSSI DLRO WEHT. It was Square's catchphrase at the time.
Advertisement:

There are logical and very justifiable reasons for video games to screw with geography.

This is a trope with two types:

Type 1 has to do with video game world maps. You might think that the map you're looking at makes pretty good sense until the following Fridge Logic kicks in: "If this were really a normal spherical world, I ought to not be able to move like this." Common map oddities include:

For all of these the technical justification is about the same: a spherical world is somewhat difficult to implement and display properly, especially on the computers and game consoles of yesteryear. Rarely are these ever a real Flat World, Ring World Planet or other exotic World Shapes - they do exist in games but they're not the reason for this trope.

Type 2 is screwing with geography in order to comply with the Rule of Fun. Spending half an hour walking to your next destination, with or without Random Encounters to spice things up, is not very fun, so let's make the world small enough to be traversable. Sailing down what in Real Life is a calm and peaceful river is not all that fun, so let's throw in fast moving water and some rock hazards. Got the idea? Admittedly sometimes this happens because of laziness or tight deadlines: "we've got a forest and we've got a desert you have to go through and we don't have time or space to make a transition area." And sometimes it is genuinely is research failure but those don't belong here.

Related to World Shapes. Compare Patchwork Map and Sorting Algorithm of Threatening Geography. Contrast Artistic License – Geography. Has elements in common with Space Compression and Units Not to Scale.