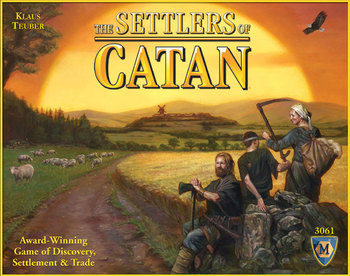 Trade, Build, Settle
Settlers of Catan (a.k.a. Die Siedler von Catan) is a multi-award-winning board game by Klaus Teuber. The competing players are settlers attempting to colonize the island of Catan and must collect and trade resources to build roads, settlements and developments. As they do so they accumulate Victory Points, with additional points being awarded for achievements such as building the longest road or having the largest army. The first player to reach a certain number of Victory Points (usually ten) wins the game.
Advertisement:

Because of its very unusual non-zero-sum game mechanic, many economics professors use this game to teach concepts of comparative advantage and other economics concepts.

List of Games and Expansions
Since its original release, several related games in the Catan universe have been released, including Starfarers of Catan, Catan: The Settlers of the Stone Age, Catan Histories: Settlers of America, a couple of Themed Stock Board Games (Star Trek Catan based on Star Trek: The Original Series, A Game of Thrones Catan: Brotherhood of the Watch based on A Song of Ice and Fire) and The Moral Substitute, Settlers of Canaan (not that its creators, who licensed the game legitimately, think the original is immoral; they just wanted to play on a map based on The Bible).

The Settlers of Catan and its expanded universe demonstrate examples of: