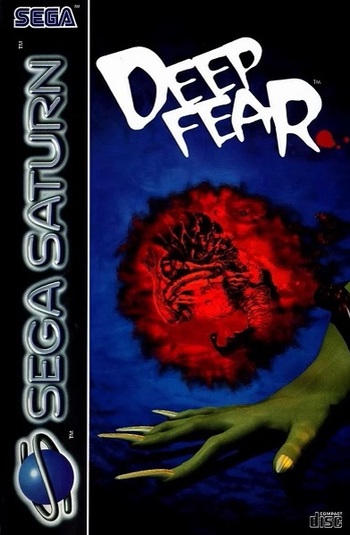 Underwater, no one can you scream.
Advertisement:

Deep Fear is a 1998 Survival Horror game for Sega Saturn, known for being the last Saturn game to reach Europe.

The player controls John Mayor from the ERS, a sort of civilian mercenary group specialised in rescues, stationed in the Big Table, an underwater army base. As the game begins, the submarine Sea Fox delivers to the base a capsule which recently fell out from space. Suddenly, the submarine inexplicably crashes, opening all its nuclear missiles hatches. John manages to go in the wreck and deactivate the hatches, but something came from the Sea Fox to the Big Table...

Deep Fear is Resident Evil IN THE OCEAN! The main feature that sets it apart from Resident Evil is that it has an Oxygen Meter that decreases as you move. To complicate matters, certain areas have less air than others, so time is of the essence.

The music is composed by Kenji Kawai, who also composed Ghost in the Shell.

The Tropes associated with this game are: