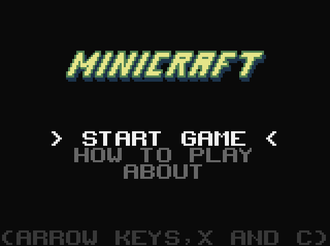 is a Video Game made in 48 hours for Ludum Dare by the Minecraft creator Notch with the theme Isolation.

Minicraft has some features from Minecraft (mining, crafting, a boss in the sky, zombies, slimes, etc.) but is in a distinctly different genre. Rather than being in a 3D first-person perspective, you are playing in a 2D overhead perspective similar to The Legend Of Zelda. The game world is still randomly generated and still has a sandbox feel, however you do not build a home (although you can place a few blocks on the ground used for crafting). You can still break many things in the game.

The game's progress basically involves first finding a place to set up and make some tools, and then descending into the earth. There are three different levels underneath the surface, the Mines, the Deep Mines and the Nether. Each one has its own unique ore. Upon getting the best materials from the Nether, you can ascend to the Sky and defeat the Air Wizard. Once killing the Sky Wizard, you become the only sentient organism in the world. Congratulations!

You cannot save during the game (the unmodded game, anyway) meaning the entire game must be completed in one sitting. This takes about 1-2 hours. Dying will make you start from the very beginning.

The game's source code was openly released, leading to several mods. Notch does plan on making an extended edition with much more gameplay features known as MiniTale, but not much information has been released on it lately.