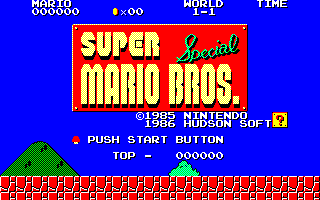 Developed by Hudson Soft and originally released for the Japanese NEC PC-8801 and Sharp X1 computers in 1986 (two months after the Disk System sequel), and the South Korean Samsung SPC-1500 in 1987, Special attempted to emulate the gameplay and graphical style of the first Super Mario Bros., but mostly failed at both. Neither computer at the time was capable of displaying the right colors, and the NEC version did not even feature scrolling. The game did introduce interesting elements not present in the original, though, such as minor enemies from Donkey Kong and Mario Bros. and new power-ups such as the Clock, which adds more seconds to the timer, and the Wing, which enables flight for a few seconds.