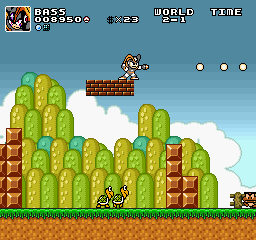 Bass and Koopa Troopas and Goombas from Super Mario Land 2 in Super Mario Bros.? Yep, it's that kind of game.
Advertisement:

(Also known as Super Mario Crossover due to space limits) is an Adobe Flash game by Exploding Rabbit (initially comprised solely of Jay Pavlina, but has expanded to include more people, with Zach Robinson contributing additional graphics to Version 2.0 and Blaine Hanna taking over as the lead developer after Version 3.0). Basically, it's the original Super Mario Bros. (and ever since a few updates Super Mario Bros. Special and Super Mario Bros.: The Lost Levels) but with Mario's brother Luigi having his Divergent Character Evolution from the later Mario games, as well as Bill Rizer, Samus Aran, Mega Man and his rival Bass, Simon Belmont, Link, Ryu Hayabusa, and Sophia the 3rd as additional playable characters, retaining the moves and physics of their source games. There's also a variety of art styles to choose from and alternate level design based on the difficulty.

Being based on Super Mario Bros., most of the tropes present there apply here.

Not to be confused with Mushroom Kingdom Fusion, which is a different game entirely.

After 3.1's release on December 16th, 2013, the game was considered to be finished. However, many years later, Jay Pavlina announced

that Version 4.0 was in development and that a playable demo was out for testing. Unlike all versions before, 4.0 was to be coded in WebGL and built on top of Unity, since web explorers are no longer supporting Flash. Unfortunately, an update to that post stated that it's been canceled.