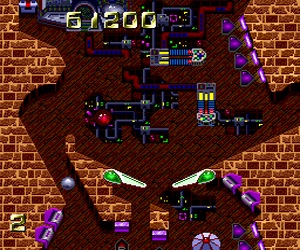 Time Cruise is a pinball video game developed and published by FACE for the TurboGrafx-16 and released in 1991.

Compared to other pinball games, Time Cruise's notable feature is its oversized playfield — the entire play area consists of seven screen-sized fields, arranged in a 3-by-3 grid. Shooting the pinball off the sides of one board would cause the screen to scroll horizontally and continue on the adjacent screen. Achieving certain goals will transfer the action to various minigames spanning various time eras, such as playing golf in prehistoric Earth or navigating a tilting maze in the distant future.

Unfortunately, the popularity of the Crush Pinball series overshadowed gamers' attention for Time Cruise, and the situation is not helped by its lackluster graphics and middling difficulty. Still, it has its fans — some are drawn to its uncomplicated pinball action, while others are drawn to its diverse collection of minigames.