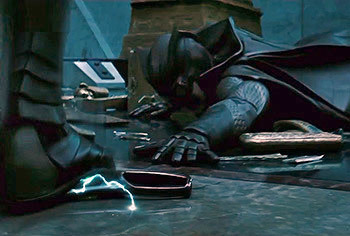 The concept: Two people are fighting. Either with swords or guns, doesn't matter. One person loses their weapon in the fight and it goes skittering across the floor (usually toward the foreground). That person dives for it or crawls to get it, dramatically... but just as their hand reaches out to grab the handle/hilt – you see their opponent's foot come down upon the weapon (or on their reaching hand), ending the battle. If the stomper is particularly powerful, expect them to outright crush the weapon under their heel.

A sister trope of Gun Struggle, which often contains one of these.

A corollary trope would be where the character almost has a grasp of the weapon and is suddenly pulled back from it (or the weapon is kicked farther away). This usually results in another scramble for the weapon, often by both participants in the battle.