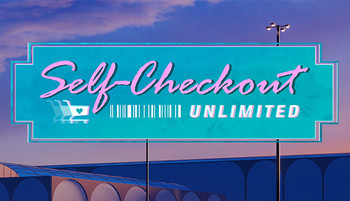 Thank you for choosing Wilson Center Mall.
It's just how you were programmed as a human being.
Advertisement:

Self-Checkout Unlimited is a walking simulator set in an empty shopping mall after closing time. The game was made by Argent Games

and is their first foray into 3D non-visual novel genres. The result: a surreal exploration of a seemingly abandoned mall, accompanied only by the voices of two PA announcers guiding you through an array of stores and otherworldly dimensions. The game was inspired by Timothy Leary's and Robert Anton Wilson's eight-circuit model of consciousness coupled with the mallsoft/"dead mall" genre, and describes itself as "a unique exploration of both mind and matter."