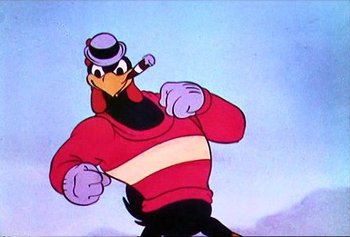 A true Chick Magnet.
Chickens are usually seen as silly, comical birds, as symbols of cowardice, or as a source of delicious food.
Advertisement:

However, there is one exception to that rule: adult male chickens, also known as "roosters", "cockerels" or "cocks" depending where you come from (although the latter term is gradually falling out of use due to its other meaning). Roosters are stereotyped as fierce and boisterous animals, and are closely associated with masculinity and machoism. They are commonly depicted as horny Casanovas who constantly flirt with and/or harass hens (in line with the latter characteristic and term), or bullies who pick on smaller fowl. Due to their more flamboyant appearance compared to hens and their habit of perching high above the ground, roosters are also associated with pompousness and Attention Whore tendencies, and are often depicted as having a smug, snobbish attitude.

There is some Truth in Television to the trope: much of this derives from roosters usually having a high testosterone level, which makes them highly aggressive and territorial to the point of fighting with other roosters and even charging straight at humans, which is why they are often used in cockfighting. They are also polygamous and often peck at subordinate chickens to ensure their dominance.

For truly monstrous creatures that are often part rooster, see Basilisk and Cockatrice. See also Cock-a-Doodle Dawn, another stereotype associated with roosters. Compare Foul Waterfowl, for when ducks and geese are portrayed with similar personalities. See Virile Stallion for another animal heavily associated with masculinity.

The Prince of the Lust ring is an incredibly loud, boisterous and masculine rooster, unafraid to strut his stuff.

The Prince of the Lust ring is an incredibly loud, boisterous and masculine rooster, unafraid to strut his stuff.