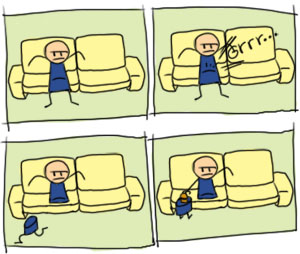 This person is putting his abilities to good use
Advertisement:

In real life, people can survive bifurcation, but the lower body can't survive because the nerves are no longer being connected to the brain and it lacks a source of oxygenated blood, therefore victims need either prosthetics on the lower body area or have to use a wheelchair for mobility. In fiction, on the other hand, people can survive without a lower body and the lower body survives without being attached to the back nerves and blood vessels: not only that, but they can also reunite both halves and become whole again. Unlike Losing Your Head regrowing it never happens. Sometimes used as a superpower, and rarely uses psychic powers to control it. Usually used as an ability.

It is usually justified for robots, because they either have a power source that keeps the lower body and upper body to keep going even when separated from the hip, or might have a normal core processor (which is the most common case). The Undead may also exhibit this ability to have the upper body and lower body apart.

Related: Saw a Woman in Half, Half the Man He Used to Be, Pulling Themselves Together, Appendage Assimilation and Having a Heart.