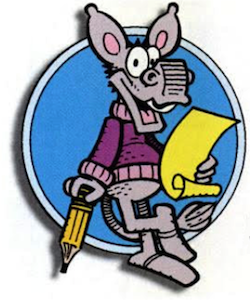 Pedro as drawn by Tom Eaton.
"In my wildest dreams I never imagined I'd be aboard an alien spacecraft doing Abbott and Costello!"
—Don Juan Pedro Ladino de Philmonte
Advertisement:

The Wacky Adventures of Pedro is a comic published in Boys' Life magazine, documenting the exploits of their long-running mascot, Pedro the "Mailburro" (previously the star of short stories and one-panel strips shown in the Boys' Life letters column, Hitchin' Rack). Tom Eaton wrote and drew Wacky Adventures from 1990-2014. His run started out as page-long Slice of Life gag strips, but gradually sent Pedro on wacky adventures spanning everywhere from his hometown of Burropolis, to the far reaches of time and space. Stephen Gilpin took over the comic from January 2016-February 2022. His run retooled the series into a Work Com set mainly at the Boys' Life publishing office.

of Pedro comics from The New '10s onward, while even older comics can be found in Google Books' collection