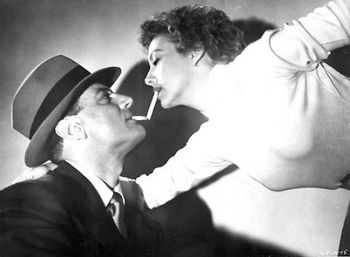 "There are worse things than murder. You can kill someone an inch at a time."
—Ernie Driscoll

Ernie Driscoll (Payne) is a taxi driver and former heavyweight boxer who took the former job after having to abandon the latter due to an eye injury sustained in his last fight. His would-be stage actress wife Pauline (Castle) has grown increasingly resentful toward him for supposedly holding them both back with his lowly labor and misplaced nostalgia.

Ernie's attempt to make things up to her by suggesting they start a family gets nipped in the bud when he comes across his wife kissing a man named Victor Rawlins (Dexter). Unknown to Ernie, who angrily drives off when the adulterous duo approach his cab, Victor is a thief who plans to run off with Pauline that night once he closes a $50,000 deal with his fellow criminals. Ernie's night gets worse when his friend Linda James (Keyes), an actual stage actress, and the team behind the play in which she wants a role enact an elaborate practical joke on him to see if her acting's up to snuff; the now doubly enraged Ernie beats several of the men before leaving and gets the police called on him for assault.

The cherry on top of Ernie's bad night is when Victor, whose money deal goes sour in part due to Pauline's presence, kills Pauline and sneaks her body into the back of Ernie's cab. Now Ernie must work with Stan Hogan (Faylen), his cab company dispatcher friend, and Linda, who seeks to make up for her part in the cruel prank, in order to clear his name before the police find him and/or Victor leaves the country.

99 River Street has examples of: